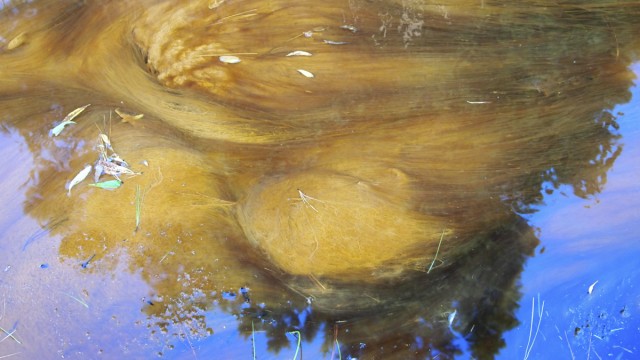 The concept of entropy began life in the world of thermodynamics, as a measure of randomness, or disorder.
Like many esoteric scientific terms, entropy has been adopted by several other disciplines, and now represents the tendency of a system – be it man-made or natural – to deteriorate inevitably toward an inert, disordered, essentially non-functional state.

A condition that is a pale shadow of what was once an inherently functional, ordered, productive scheme.
Mining and other human activities have exacerbated the disorder in our earth’s systems.

In this first exhibition by Isla MacGregor, Entropy 1, we see images of Tasmania that conflict with the dominant wilderness photography product – a product that has saturated our collective perception of how Tasmania is shown to the outside world.

Isla first came to Tasmania in 1979 and for a few weeks lived in the small mining town of Rosebery on Tasmania’s west coast.  It was against the backdrop of the stunningly beautiful Mount Murchison that Isla fell in love with Tasmania.  During those few weeks she explored many of the area’s legacy mine sites, and revived her passion for mineral collecting and geomorphology.

Isla seeks to explore the conflicted zone between the romanticised imagery of artists and historians, the deep connection to place felt by mining folk, and the severe degradation of the environment that follows mining activity.  The evocative images of the roaster at The Tasmanian Smelters at Zeehan, set against the flayed hills, are nostalgic reminders of the hardships endured by many early mining families on the west coast.

Forever battered by wild winds and rains, the smelter continues to fall into a state of disorder – a red, raw relic presiding over decades of mine waste.  Acid mine drainage from the surrounding waste heaps and a toxic metal lode leach into the Little Henty River as it journeys to the Great Southern Ocean.

Thus it is that mining eats away at our geomorphology, turning the ecological order of nature into a perverse disorder.

The island state of Tasmania has over 4,000 mine sites.  There are 682 abandoned mines, 215 of which are polluting over 75 waterways known to be contaminated with acid mine drainage and some with a noxious cocktail of heavy metals – they are a poisonous legacy for future generations.

The hidden disorder wrought by humans and our structures, and their collision with our ecology, are the inspiration for Isla’s photographic work.

In recent years Isla has travelled extensively in outback Australia photographing geological formations and legacy mine sites from Chillagoe in northern Queensland, to Waukaringa in South Australia, and the old mine at Captains Flats.  Heavy metals from Captains Flats continue to leach into the Molonglo River, and then into Lake Burley Griffin in Canberra.

Isla views the camera as a transformative tool – one which can be used to change the way we think about resource extraction, its impact on the world’s climate and ecology, and our dependence on the industrialised world.

This collection of images exploring the collision of human enterprise with the naturally evolving world is the first in a series of future exhibitions on the theme of Entropy.

These images are copyright Isla MacGregor, if you want to use them please contact us.