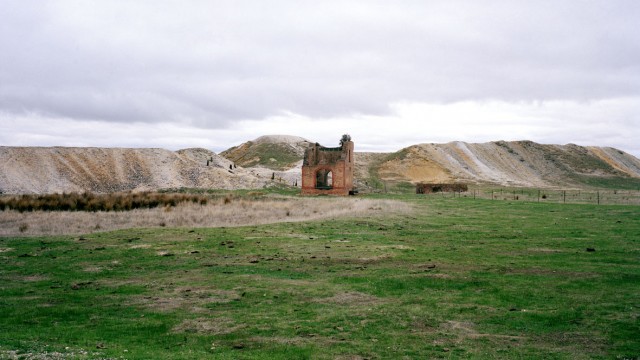 Fourteen Ounces | 2013
A photographic series by Jessie Boylan focusing on the Central Victorian Goldfields, supported by the Mineral Policy Institute.

The discovery of gold in the Victorian Goldfields in the mid 19th century attracted an unprecedented population and caused an enormous housing and economic boom in the region, but since the end of the Australian gold rush, the Central Victorian Goldfields have been virtually silent for half a century. What’s left are thousands of disused mine sites, diggings, ghost towns and multiple scars on the landscape that tell a story of settler Australia and its destiny.

Fourteen Ounces, an ongoing photographic series, traces the contours of the Central Victorian Goldfields and records the social, economic and environmental legacies of the minerals boom in Victoria.

Starting with the discovery of the first saleable quantity of gold, fourteen ounces, by James Esmond in Clunes in 1851, this work looks not only at major sites relevant to the gold rush days, but smaller sites, now overgrown in forests, acting as if they have always been there, and larger sites that are now sheep and cattle grazing fields, melding with the contemporary landscape that remains.

Whilst the environmental legacies of the Victorian gold rush are more subtle than some of the sites we’ve documented in QLD and the NT, it is an important story for the Mining Legacies project as the landscape and population was changed forever in Victoria (as it was in NSW and QLD), during this period.

One of the first sites that I came across was the Amelia Reef in Newbury, near Trentham; almost completely covered with overgrowth, one could barely make out that it was once a site for gold mining. I came across an old article from The Argus, from February 1865 about the area:

This district, so long considered the Siberia, if not the Sahara, of the Victorian gold-fields, has latterly displayed such signs of a golden vitality, and of substantial metal as well as golden hopes, that the miners in the favourite localities, and the mining speculators of Daylesford, Castlemaine, and Ballarat, have gone into the heart of the under-ground mysteries with an earnest energy that augurs well for a speedy success. Newbury was at first the great centre of mining operations, but that place, always the most squalid, muddy, uncouth, and miserable locality conceivable, has been utterly deserted for months. Some of your contemporaries have fallen into error in confounding the whole of the Blue Mountain with that squalid Newbury. The main diggings now flourishing, and on the eve, as the best judges consider, of very great things, are at Garlick’s and Kirk’s, at the Alma and the Amelia Reefs, at the Coliban River and Trentham Creek, and at the little township of Trentham. All these are “alive and digging.” Newbury is dead and deserted.

Some of the other sites I’ve photographed are within the Wombat State Forest, one site that is planned for development in the coming months, and others that are old shafts hidden under green foliage, that one could easily fall into if you weren’t looking. Other sites were around Clunes, Smeaton and Hepburn, and now I have moved on to looking around Castlemaine, as they are just a short walk from houses throughout the town.

The exhibition was shown alongside Katrin Koenning’s photographs of outback Australia at the Colour Factory in Fitzroy, Victoria, in July this year. Dr Daniel Palmer, Senior Lecturer in the Art History & Theory Program at Monash University opened the show and said of my work:

“…In her photographs there are no people, only some sheep perched on strange embankments. But signs of human presence are everywhere, from a gum tree tied with a ribbon to a lone European pine and palm tree, from remnant brick structures at Clunes to piles of rocks and mounds of rubble in Smeaton, and, most obviously, protestors’ signs saying ‘No Mines’ in an image of an otherwise unspoiled scene in Wombat Forest. Without reading the captions, these emphatic two words become the major clue as to what these landscapes signify, as to what has taken place there before or indeed might take place in the future (and also to Boylan’s intentions). In short, it becomes clear that these photographs reveal an overgrown history of the Central Victorian Goldfields region, and its resulting environmental impact, as well as sites of possible future activity (with increasing gold prices, interest in gold mining in the region has returned over the past two decades). Although realist, with their matter of fact depictions of sites, Boylan’s photographs arguably belong to a critical history of anti-naturalism. By only pointing towards the possible histories or futures the images evoke, they remind us that there are always other way to see what we see. In this way, they destroy the illusion of naturalness and encourage critical reflection.” “…When we look at the Australian landscape – indeed whenever we view land as a landscape – we are always bringing preconceived ideas to bear. Seeing and knowing are utterly intertwined.”

This work will keep me exploring this area for some time, as every time I go for a walk or run in the bush near my house in Castlemaine I come across another site. I am slowly uncovering a history that has been here since the mid 19th Century, something that I have almost completely ignored until now.
– Jessie Boylan, December 2013.

To see more of the photographs from this series go here.